Well the summer has surely been amazing so far this year.  Who would have thought 2018 would be a record breaking summer.  The wedding season has gone off to a brilliant start and hardly a drop of rain to spoil the day.   I now have the most fragranced Sweet Peas in my garden to choose from as well as some beautiful Hydrangea.  The Hydrangea have been very labour intensive during this hot spell as their name depicts they are incredibly thirsty.  The ones I have in posts have been watered sometimes three times a day Phew!!

A little fragrant posy below I found in my archive from about 4 or 5 years ago with a little dried lavender.  We recreated this as an ever lasting bouquet a few months later.

There are a busy few months left this year of weddings and parties as well as venue open days to attend all to keep us on out toes.

If you re planning a wedding or a special occasion pop along to the open day at Brinkburn Northumberland on Sunday 12th August from 11 till 3 or Thursday 23rd August 4 till 8.  Set in the woods by the river, party in the tipi and a ceremony in the Priory or white room.  or if its a barn you are after, Doxford Barns on 23rd August 5 till 8.  Set on a working farm in the middle of the rolling Northumberland Countryside.

Do you love tulips?  This little beauty is a double Ivory  tulip from Smith and Munson fabulous English flower growers.  They look beautiful on their own in a vase and the simplicity is stunning.  Their stems continue to grow causing them to twist and turn to grow towards the light and trail over the side of their vase.  It’s always sad to see the end of the season but there is always something else around the corner.

The Tulip is beautiful in a long and trailing shower bouquet for a bride to carry along with a little Freesia and stunning garden Roses.  Add in a little foliage for a softer look or a few twiggies for a more rustic look.

We battle with many things as a wedding florist, flowers, foliage, getting the timings of opening flowers correct, the heat, the cold and the logistics of weather.  Last week we were met by the ‘Beast from the East’ and it was not to be under estimated

We only had one wedding last week fortunately, on Wednesday.  We were due at the beautiful Eshott Hall in Northumbetlnad at around 11am.  The snow over night was heavy and as the morning went on it gathered pace.

Our flower delivery consisted of beautiful white Norma Jeane Roses and Freesia for the bride, lots of little cut glass vases containing the same flowers along with a little Gypsophelia and Eucalytus.  We had two large vases of flowers and a couple of candelabra with gorgeous blush candles for a small intimate wedding of 14 guests.

Delivery had to be by car as the snow got heavier and heavier, we set off and within 30 minutes were well and truly in a snow drift, about an hour and a half later we were still digging in blizzard and white out conditions!  Disaster.  A phone call to the hotel do you have a 4×4 that can come to our rescue?  Then both of our mobile phones died (apparently lithium batteries do not like the cold!).  10 minutes later we heard an engine approaching how pleased were we.  It was Sean the gardener  he arrived with his quad, a shovel and a tow rope and within 15 minutes we were out.  I had had visions of ploughing through the fields with the brides bouquet above my head!!  Crisis averted.

it snowed heavy for the next four hours, the wedding ceremony took place, the hair and make up girls left in a 4×4 and we waited for the ceremony to end and Sean to attach the plough to the front of the quad.  We left in a convoy with Sean at the front, the registrars had left their cars by the A1 we gave them a lift to be duly re United with their vehicles.  The few guests that arrived and the bride and groom had to stay an extra night as well as the skeleton staff.  They were well and truly snowed in.  With many thanks to the Eshott Hall team and all of the fantastic proffesionals who turned up to make a very special couples day become a reality.

A few bits and pieces from last year just came to mind.  Its the little details that make a big impression.  Pretty chair decoration, a mini Sunflower button hole and a picture frame with fresh flowers as a table name with flowers in a glass tube.  The new wedding season is under way and our thoughts are popping around thinking of different ideas for our wedding fairs.  Two to look out for in March: Doxford Barns and The Town Hall in Morpeth, both on the 18th March, watch this space as I divide myself in two. 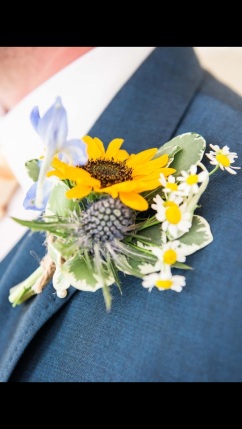 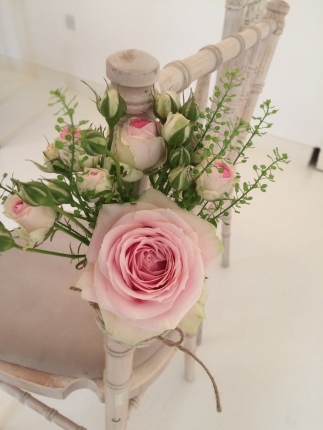 The new wedding season is about to begin there are so many exciting things to explore.  All of the venues are getting ready to show their newly engaged couples around their properties.  Everywhere there is a fresh lick of paint and a general spring clean.

Here at Lavenders Blue headquarters we are tidying our shelves and sorting out the huge box of ribbon that insists it has to be unruly all of the time.  All of the christmas containers are away for a few months, along with red candles and christmas ribbon from the workshops.  The vases are all washed and put back in their boxes. We have an exciting couple of months ahead with venue open days to prepare for and the first wedding of the year only three days away.  The van has had a service and a new set of tyres.  So lets begin 2018 we look forward to chatting all things floral, come and see us at one of the open days.  If i am  not there the flowers will be and you can always give me a call 07890745001

Looking forward to meeting you at:

Foliage arrangements. Lots of texture and interesting shapes.
What will your style be?
Simple and unstructured neutral toned bouquets are timeless.
Yesterday I posted the bright colours now something still with colour but a bit more muted.
Bouquets come in all styles and colours. Don’t be afraid to add a pop of colour to your florals. Pretty dresses in sage, navy and blush are popular they are all a blank canvas to work with.
Wishing a Happy Christmas to all of our amazing couples, our followers, all of the staff working in the many venues we have worked in this year. To all my fellow suppliers who have worked tirelessly to bring it all together in some very difficult times. We have done it guys now bring on 2022.

Foliage arrangements. Lots of texture and interesting shapes.
What will your style be?
Simple and unstructured neutral toned bouquets are timeless.